Arizona is a hub of many incredible creations and rich history. It's hard to cover all this in a page. But the best of all could be picked, so here Arizona shuttle has listed out the architectural works of Arizona. These places are famous for their architectural works and always stand out. So take a visit to these places and be amazed by the structural formation and the minor details that make the biggest impact. 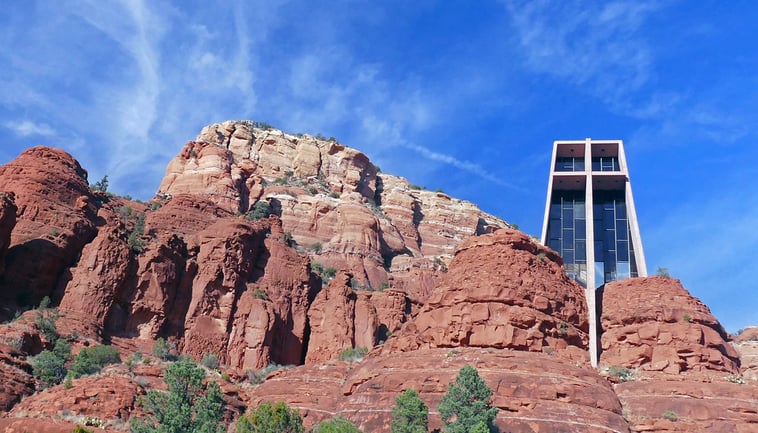 Chapel of the Holy Cross

The chapel of the Holy Cross is a Roman Catholic chapel whose construction took Two whole years from 1954 to 1956. It is located in the red rock buttes of Sedona, Arizona. It was designed by August K. Strotz of the firm Anshen & Allen, with Richard Hein of the firm as the project architect. In 2007 it was voted to be one of the seven man-made wonders of Arizona. The main attraction of this place is its 90 feet tall iron cross. And the walls, to achieve a textured look, were sandblasted.

Taliesin West is located in Scottsdale, Arizona. Which was the studio and winter house of architect Frank Lloyd Wright. It was constructed in 1937 and today is the headquarter of the Frank Lloyd Wright Foundation. It is open for the public to take the tour. The structure is formed keeping in mind the representation of Arizona's long, low, sweeping lines and uptilting planes. The materials used in the construction were those which were readily available rather than importing them. The roof was covered by translucent canvas, later replaced with plastic due to the intense sun in Arizona.

Burton Barr Central Library is the central library of phoenix. This library has a collection of 1 million volumes. It is a five-storied building that was constructed in the year 1995, it spreads out over 2,80,000 sq feet. This place features a blazing light reading room, a designated Arizona room, Teen Central, and Children's Place.

The gold behind the construction of this place was to explore the concepts of arcology and bring together architecture and ecology. Italian-American architect Paolo Soleri proposed the concept. The campus consists of 12 buildings which were completed in different intervals from the 70s to the 80s, it was basically building an experimental town that now consists of all the needed amenities.

Montezuma Castle is a one-of-a-kind creation that preserves the house used and constructed by the  Sinagua people during the period AD 1100 and 1425. The castle is located 90 feet up a limestone cliff. It is a five-storied structure that represents their skills.

Arizona shuttle is at your service to give you a safe trip and provide flexibility in making changes without any charge. You can choose a transport that fits your need as we provide shuttle service, SUVs, and pre-booked luxury cars. All of this can be availed 24/7. So book your ride now. For more information, contact (480) 710-3441.