The Rusty Wallace Racing Experience puts you behind the wheel of the fastest NASCAR-style racing experience in the country!

Rusty Wallace announced on January 6, 2012, that the team would take a break due to a lack of sponsorship. In 2012, the team returned to the Nationwide Series with Steven Wallace for a single race at Richmond. With Steve Wallace at the wheel, the team made it's final Nationwide Series start in 2013. Rusty Wallace Racing is still in business, running super late models for Steve Wallace in the CARS and NASCAR Whelen All-American Series. 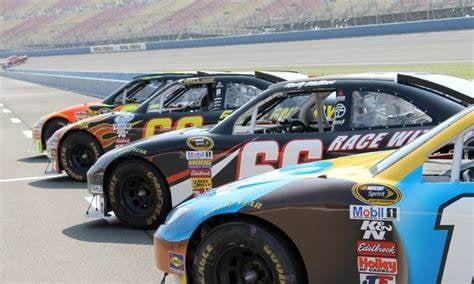 RWI began as Rusty Wallace's marketing firm in 1984. It started racing in 1985, with Wallace driving the No. 66 Oldsmobile. He won the pole in his first race at Daytona International Speedway and won three more races that season, including two top-five finishes in a row. In 1986 and 1988, he competed in three races and finished in the top ten four times, thanks to sponsorship from Alugard and Kodiak.

Wallace started driving the No. 36 Cox Treated Lumber Pontiac for his younger brother Kenny in 1989. In addition to his sixth-place points finish, he won three poles and had sixteen top-ten finishes, and he was named Rookie of the Year. Following a winless 1990 season, he won his first career race at Volusia County Speedway, followed by another victory at New Hampshire International Speedway later that year, allowing him to finish a career-best second in points. Wallace had just one win and finished sixth in points in 1992 when Dirt Devil became the team's new sponsor. The team was dissolved following Kenny's promotion to the Winston Cup series.

RWI returned to competition in 2004, with up to three teams operating out of its Mooresville, North Carolina headquarters. The team ceased operations following the 2011 season due to a lack of sponsorship to compete, many employees being laid off, and half of the company's equipment being sold. The downsized team returned part-time in 2012 and 2013, using Roush Fenway Racing equipment.

Rusty Wallace Racing Experience stimulates adrenal glands by sending speed demons around the paved oval track at Phoenix International Raceway. Need-for-speeders can hop aboard an authentic stock car and share four laps of in-the-action views with a professional driver with the shotgun ride-along. Participants in the Shootout racing experience can put on a custom Oakley racing suit and tear around the 1-mile track's 10- to 12-degree banked turns like a pro racer or an ambitious after-hours janitor. After 45 minutes of classroom instruction familiarizes aspiring drivers with the course's corners, students get behind the wheel for 12 exhilarating laps, leaving their hair mussed, eyes bulging, and torsos coated in corporate sponsorships.

Explore and experience these natural wonders; the Arizona shuttle is available to help you along the way. We offer simple booking as well as door-to-door service. We provide professional chauffeurs as well as uniformed drivers and clean vehicles. Their mission is to create lifetime customer loyalty by exceeding their service expectations. We offer shuttle and sedan service for any occasion. We guarantee safe rides because we conduct background checks and provide door-to-door service, eliminating the need to wait at bus stops and saving money on taxi fares. So reserve your ride with us.